There is always a new wrinkle with every project when it comes to migrating mailboxes to Office 365 from an on premise Exchange environment. This week is no exception.

While moving the first mailbox to Office 365 from Exchange 2010 via hybrid, the status showed as “Queued” for longer than was expected. As a result, the move request was removed. After subsequent move request attempts provided the same results, the request was left in the “Queued” status overnight. The following morning the status showed “Completed”. Interestingly enough, each mailbox was queued for approximately 60 minutes before it started moving without intervention. However, I can’t wait that long (and neither could the customer).

I supposed it was an anomaly, however, additional move requests didn’t amount to anything different. Investigation of the move request details provided this information…

Searches did not provide any resolution. Therefore, I sent a query out to the Twitter community and received a response from Joe Palarchio. 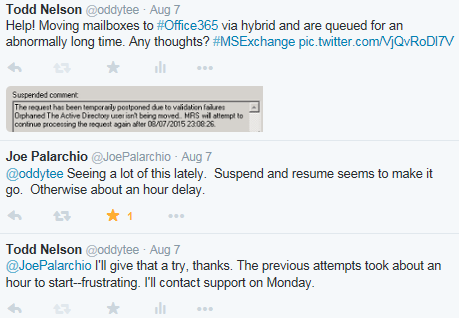 Joe’s response helped me to know I wasn’t going crazy. And sure enough, suspending then resuming the move requests caused the mailboxes to start moving immediately. I’m unsure if something is going on this week at Microsoft but am glad to know I didn’t need to involve support.

It’s easy enough to perform this task through the EMC but let’ see what the PowerShell commands look like.

First, connect to Office 365 via PowerShell.

Then, let’s run this basic command to return the status of all move requests…

Next, run this command to see only the move requests that are queued…

Finally, run this command to suspend all queued move requests…

If you ever have a situation where you are migrating mailboxes from a hybrid server and they are queued for an abnormally long time, don’t forget to try this little trick to get your project moving along without further delays.

Good luck and have fun!