An issue presented itself when attempting to load balance Exchange 2013 servers with a Citrix NetScaler VPX (virtual appliance); the configured virtual servers and service groups in the NetScaler showed portions of one of two Exchange servers being down.

The monitors configured are checking for the presence of the healthcheck.htm file. Microsoft has given us a way to check each virtual directory (vdir) in Exchange 2013 for availability and health with Health Probe Checking. Healthcheck.htm is available for each vdir when they are healthy and not when “not healthy”.

Each of the monitors configured in the NetScaler rely on /healthcheck.htm to determine whether a Exchange service area is available or not based on the state of a component associated with a specific protocol. It is important to note that healthcheck.htm exists only in memory when the component state is active for its associated protocol.

Below are the Exchange 2013 vdirs and the associated component protocol URLs available to perform cursory health checks of Exchange. 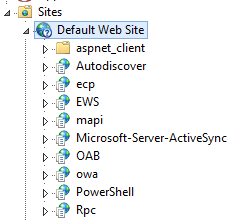 When checking each of those URLs, we should receive a “200 OK” message with the internal FQDN of the server we are targeting when the health of the vdir is good…

…And if the health of the vdir is bad, the result will show “This page can’t be displayed”. 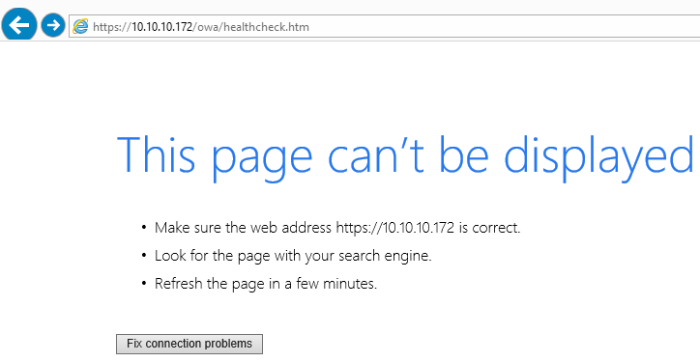 NOTE: At the time this issue presented itself, the Exchange 2013 servers were running CU7. Additionally, there are 2 multi-role servers which are members of a database availability group (DAG) hosting 1 active database each.

The “problem” server was investigated for health issues using Get-HealthReport “SERVERNAME” which identified the AlertValue of several HealthSets as being “unhealthy”. The databases were even moved back and forth in an attempt to “shake something loose”. Further troubleshooting proved fruitless and the server was ultimately restarted. However, a restart did nothing to resolve the issue either; as running Get-HelthReport provided the same results. At this point, the server was determined to be working normally as users could still access mailboxes via Outlook, OWA and smart devices. Therefore, it was decided to schedule another day to dig into the issue.

Along comes CU8… On Tue 17 Mar 2015, with the release of CU8 for Exchange 2013, I was all over updating the “problem” server as a possible resolution. The server was updated and restarted. Sure enough the NetScaler was happy again and reported all target services up.

However, that was very short-lived. Apparently, the “problem” server showed healthy from the NetScaler’s perspective for just a brief moment and then showed the same services on the same server being inaccessible.

I really was at a loss and didn’t know what to search for. As we all do, I made a request to the community on Twitter and then went to Bing searching for anything that referenced “healthcheck.htm”. Findings were miniscule and hope was all but lost when a crumb was found in the TechNet Exchange Server Forums that provided some welcomed guidance.

As was suggested, Get-ServerComponentState “SERVERNAME” was run against the “problem” server that showed 5 of the 7 components that the NetScaler was monitoring were in an “inactive” state. Ah ha! And when the same command was run on the other Exchange server, the state of all the components showed active.

Though a restart of the server did not address the issue previously, I went ahead and restarted the ‘Microsoft Exchange Health Manager’ service. That did not help either. I went as far as attempting to force the components into an active state with the following command. Still, no joy.

Next, Looking to ADUC in the ‘Microsoft Exchange System Objects/Monitoring Mailboxes’ OU, twenty-six (26) “HealthMailboxes” were found. This seemed like a really high number of mailboxes given what was stated in the forum post. However, with an article posted by the Exchange Team on Fri 20 Mar 2015, it appeared that the number of monitoring mailboxes was about right.

NOTE: Based on the Exchange Team article as I understand it, my environment (with 2 multi-role servers and 2 mailbox databases [with DAG copies]) should have 24 monitoring mailboxes. But there were 26.

Now, for the moment of truth…

Get-ServerComponentState was run against the “problem” server again. This time, all components that previously were in an inactive state now showed active. Huzzah!!!

The NetScaler? … Currently, it’s as happy as I am.

This was a relatively easy fix for what was a couple days of research and frustration. Ultimately, we could not track down the source of why the problem began in the first place; but considering everything was fine the day before, I chalk it up to some database failover testing we were performing at the time the issue presented itself. I can safely say that many environments have this issue present but Exchange admins are unaware of it. You don’t need a load balancer to find out there is a problem. And it doesn’t only present itself when a DAG is configured.

12 thoughts on ““This Page Can’t Be Displayed” When Accessing /’protocol’ /healthcheck.htm in Exchange 2013”